Selenium reduces the formation of thrombosis in the blood vessels. According to Fogarty, blood coagulation disorders leading to the formation of micro-clots are a significant cause of death in patients with COVID-19.

Selenium supplementation in the prevention of coronavirus infections (COVID-19)

Selenium (Se) is a ubiquitous element akin to sulfur (S) existing in the Earth crust in various organic and inorganic forms. Selenium concentration varies greatly depending on the geographic area. Consequently, the content of selenium in food products is also variable. It is known that low Se is associated with increased incidence of cancer and heart diseases. Therefore, it is advisable to supplement diet with this element albeit in a proper form. Although blood increased concentrations of Se can be achieved with various pharmacological preparations, only one chemical form (sodium selenite) can offer a true protection. Sodium selenite, but not selenate, can oxidize thiol groups in the virus protein disulfide isomerase rendering it unable to penetrate the healthy cell membrane. In this way selenite inhibits the entrance of viruses into the healthy cells and abolish their infectivity. Therefore, this simple chemical compound can potentially be used in the recent battle against coronavirus epidemic.

Selenium (Se) is similar to sulfur (S) [1], but its concentration in Earth crust is much lower and its distribution is very uneven [2]. Sulfur, by contrast to selenium, is widely present in inorganic and organic compounds, particularly in proteins in the form of intra- or intermolecular disulfides bridges, that determine their specific properties and functions. It is known, however, that such bridges are susceptible to the so-called disulfide exchange reaction and in this way alter their spatial configuration. A classic example is a limited disulfide reduction of human serum that results in the formation of a huge insoluble copolymer composed of all its proteins [3], that is effectively inhibited by sodium selenite [4], [5]. In nature Se exists mostly in two forms, namely as selenites with tetravalent (Se4+), and as selenates with hexavalent (Se6+) cations, respectively, from which all other selenium species are derived. Organic forms of selenium are found in plants, fruits, seeds and particularly in Brazilian nuts in the form of selenides e.g. as selenocysteine and selenomethionine. Human daily intake of Se varies greatly, from 50 to 600 µg/day depending on the geographical location of the soil on which food products are grown. In extreme cases, a very low content of Se in soil brings about pathologic consequences known as Keshan disease [6]. Grains are also important sources of dietary selenium. However, there are significant differences in the Se content in grains cultivated in the North America (0.3–1.3 µg/g) and those grown e.g. in Sweden (0.007–0.22 µg/g). On the other hand, the selenium concentration in seafood is relatively high (0.1–3.9 µg/g). It was suggested decades ago that selenium may possess cancer-protecting effects in man, and that the selenium-deficient diet in the developed countries may contribute to increased incidence of malignant tumors [7] as well as to increased viral infections [8]. However, it should be strongly emphasized that only redox active selenite displays beneficial health effects.

It is generally believed that selenium and its compounds are antioxidants. This confusing notion stems from the observation that selenium is a cofactor in glutathione peroxidase, a biologically powerful antioxidant. It should be noted that the term “oxidation” is somewhat misleading because it does not always involve oxygen atoms. Simply, an oxidant is an atom and/or a molecule that accepts, and a reductant is such that donates electrons, respectively. Thus, selenite with tetravalent cation (Se4+) can accept two electrons to become divalent cation (Se2+) and this way act as an oxidant. This oxidizing capacity of selenite has important implications for its antiviral property. Selenite reacts readily with the sulfhydryl groups in the active site of viral protein disulfide isomerase (PDI) converting them to inactive disulfide according to the following formula:PDI-(SH)2+Se4+→PDI-SS-PDI+Se2+

In this way the viral hydrophobic spike loses its ability to undergo the exchange reaction with disulfide groups of cell membrane proteins and prevents virus entering to the healthy cell cytoplasm [12]. The same mechanism applies to the action of surface disinfection agents that contain oxidizing agents such as phenol, hydrogen peroxide, any hypochlorite [13]. It should be noted that selenium has been implicated as an important factor in aging and aging related diseases [14], and in the prevention of mammary cancer [15]. There also numerous reports describing the relationship between selenium and other diseases such as type 2 diabetes mellitus [16], asthma [17], and cardiovascular diseases [18], [19]. Significance of selenium in human health was extensively reviewed by Brown & Arthur [20]. Apparently, these diseases are associated with the increased expression of the protein sulfhydryl groups (-SH), which are then oxidized by selenium to inactive disulfides bonds (S-S).

In view of the facts mentioned above it seems logical to assume that sodium selenite could represent a potential agent for the prevention of viral infections including coronavirus, according to the mechanism suggested for the Ebola virus [21]. In the paper presented by Jayawarden [22], the authors stated that selenium supplementation inhibited the development of polio and influenza virus. Which also agrees with our hypothesis that selenium strengthens the immune system. This element increases the proliferation of natural killer (NK) cells. Selenium also has a positive effect in combination with some vitamins (D, E) as presented in the work Delesderrier et al. [23]. The combination of phytoncides found in onions along with selenium increased T lymphocyte proliferation [24]. In addition, selenium reduces the formation of thrombosis in the blood vessels. According to Fogarty [25], blood coagulation disorders leading to the formation of micro-clots are a significant cause of death in patients with COVID-19. We believe that the use of sodium selenite in anticoagulation therapy may reduce the risk of blood clots forming (formation of high-molecular polymer – parafibrin) in patients with COVID-19 particularly at risk for its severe course. It should be mentioned that this chemical reagent is rather inexpensive and readily available. It is only unfortunately that physicians, having limited knowledge of this mineral, cannot understand that such a simple chemical substance can have such dramatic health effects. 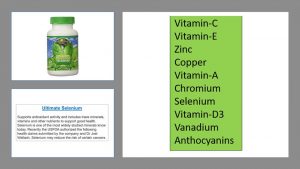 Contact us for a FREE CD on Selenium by Dr. Gerhard Schrauzer

IT’S ALL IN YOUR HEAD!

It's finally HERE! Dr. Wallach's newest book IT'S ALL IN YOUR HEAD! How the 12 cranial nerves IN YOUR HEAD effects your body's health and how to fix it... WITHOUT A DOCTOR! AFIB, COPD, Reflux, Bloating, Diarrhea, Gastroperesis,...